If I comment out the NXRM npm-group registry from my ~/.npmrc file, the initialization runs. I see on npmjs.com that @web/dev-server@^0.1.11 is only 10 hours old at the moment. Is that the issue? I have several older versions of @web/dev-server in npm-package.

The Nexus defaults check for updates much more frequently than every 10-hours.

I am the only developer using this server. There have been no changes to the settings of this repository in many months, during which time I have not see this or a similar error. As you can see from the accompanying screenshot, I have several earlier versions of this package, but not the one with the error, 0.1.11. As I stated, if I comment out npm-group as my repository in ~/.npmrc the package installs fine from npmjs.com. 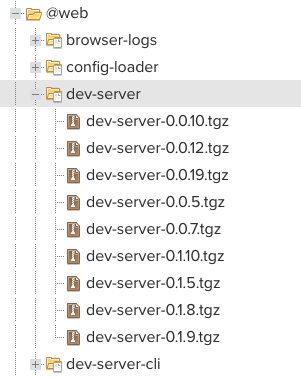 We’re facing the same problem.
We also use a NXRM npm-group that is configured as registry in the npmrc.

For example, when I npm install @craco/craco, I get the error that the dependency accepts@~1.3.8 is not present.

However, the package can be found on the NXRM.

If I remove the NXRM npm-group registry from the .npmrc file, the installation succeeds.
We have observed that this behavior only occurs with npm version >= 7. With npm 6 there are no problems.

It seems that there is a problem with NXRM groups starting from npm version 7.

Yes, sounds similar to what I saw in April 2021 (see above). In my case–checks notes–five days later I uncommented the NXRM npm-group registry in my .npmrc file and the package worked. I had done nothing in the interim. NOTHING. I’ve no idea why it failed to begin with or why is suddenly worked. Clearly there’s an issue, but to my knowledge no one is looking into it. What version of NXRM are you running? I’m still using 3.30.0-01, but I’m now running npm 8.5.2.

In my case–checks notes–five days later I uncommented the NXRM npm-group registry in my .npmrc file and the package worked.

I have also observed something similar. At one point, it worked again. However, I tried various things, so I can’t tell if any of it helped, or if it was coincidence.

I played around a bit with the local npm cache. With npm 8.x and installing the npm package using an alternative npm cache, the package installed fine. npm i --cache ~/tmp/alt-npm-cache @craco/craco

Then I cleared my local npm cache npm cache clean --force. Also then the package could be installed without errors.

No idea if this fixes the problem in the end. But it must be a problem related to the NXRM, because without it there is no problem.