An oft requested feature by users is the ability to delete a larger amount of content from repositories. With the 3.15 release while browsing the tree if a user selects a folder they have access to a new Delete Folder button in the right sidebar.

After the user confirms their choice Nexus Repository Manager will asynchronously remove the contents of the folder at the time of the request; files added later or which the user does not have the delete permission for will not be removed.

Readers familiar with Maven may know that to produce consistent builds Maven maintains multiple builds of snapshots identified with a timestamp in the version. This often leads to a large number of files in a snapshot directory when one has multiple builds, artifacts and checksums. With 3.15, we’ve introduced synthetic nodes into the tree view representing these timestamps which should simplify the view for a user looking at a snapshot. 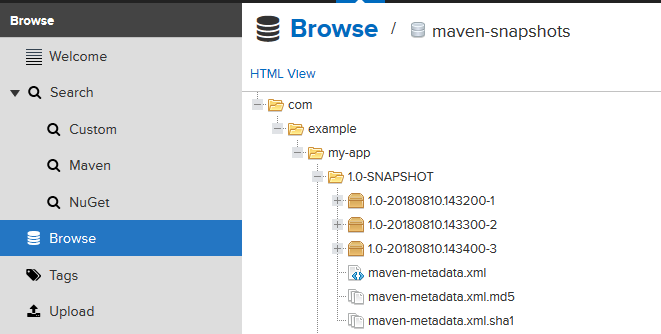 As part of our ongoing research with users we’ve implemented a number of features suggested by people we spoke to. There are a few in particular we’d like to point out in browse which were added in this release:

If you would like to provide feedback on Nexus Repository Manager, fill out our participation form to join a usability test or product team call.